A suspended ceiling is a type of finish system that is hung below the ceiling  structure within a room or building. It may be suspended from a roof or ceiling deck, which consists of structural framing joists that support loads above and below the deck. The majority of suspended ceiling systems are made up of steel grid and acoustical tiles or gypsum white vinyl tiles though other materials can also be used. Metal hanger wires are used to suspend these systems anywhere from three inches to more than a foot (7.6 cm to 30.5 cm) below the deck.

These ceilings can be installed over existing drywall, exposed wood framing, steel joists, or even tile ceiling finishes. In a typical suspended ceiling system, the tile is supported by thin metal frames that run in a grid pattern across the room known as main tees and cross tees white angles or shadow angles known as M6 or SM25 is attached to the wall around the entire perimeter of the room. The remainder of the grid is suspended by hanger wires, though the ends of each grid section rest on the M6 or SM25 for extra support.

A suspended ceiling offers many advantages over other types of cei 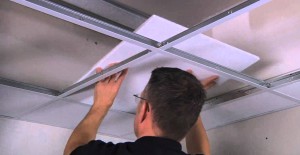 ling structures. Because it is suspended below the deck, the interstitial space can serve as an air plenum for ventilation. This space can also be used to hide pipes, ducts and electrical wiring. Because the tiles are easily removable, it is still possible to access mechanical and electrical equipment above the ceiling for maintenance and service. Suspended grid systems are also relatively affordable and can be installed quickly and easily.